Do animals also commit suicide? Many times some people take wrong steps like suicide by being troubled by problems like stress and disappointment etc. going on in life. Human suicide is not a new thing, but have you ever heard of an animal committing suicide? It may sound strange to read, but it has been proved that sometimes even animals and birds get the feeling of ending their life out of despair. Even animals in their life struggle with problems like stress, pressure and frustration.

A US report says that there has been an increase in the tendency of animals to commit suicide in the last decade. Among the animals that commit suicide, the maximum number is of mammals. Let us now look at some such incidents when animals committed suicide.

when 1500 sheep jumped off a hill at once

This incident happened in the year 2005, when in Turkey together about 1500 sheep tried to commit suicide by jumping from a hill. The shepherds had left the sheep to graze in the morning. After that he found about 500 dead sheep down the hill. The number of sheep killed could have been even higher, as later sheep either fell on top of the dead sheep or were rescued. In August 2009, 28 cows and bulls committed suicide by jumping off a hill in Switzerland. Although this type of incident was common in this area, but it was a rare incident for so many cows to jump and die from one place in just three days. Local people tell that for this the fierce roar of storms is responsible which incites the animals to do so.

Dolphin died in the hands of the trainer About 62 years ago a dolphin killed itself in a 1960 TV show Flipper. Actually, there is a specialty in dolphins and whales that they do not breathe easily like us, rather they have to work very hard for each of their breaths. That is, she can end her life whenever she wants. Show’s trainer Richard told that the dolphin was very sad that day. She swam to his arms, looked into his eyes and took a breath… and it was her last breath. 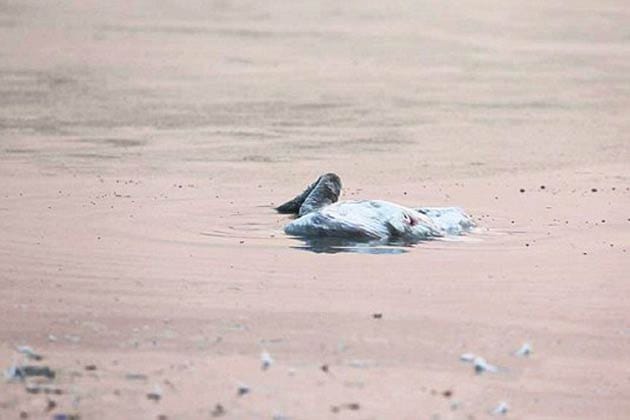 Read this also – The place where it rains diamonds! The wind here also blows at supersonic speed.